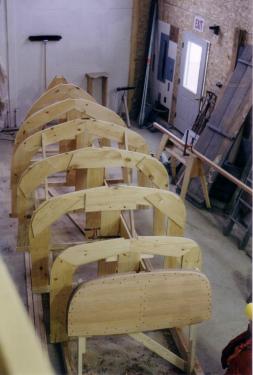 TUG’s molds, stem and transom set up in the shop.

Boats like TUG were once common along the southern New England coast, and were often called Noank Boats.

Small, but able to take whatever weather might come their way, they were used primarily for lobstering.

While these boats were usually modeled by their builder, TUG was designed by the up and coming William Hand, Jr. 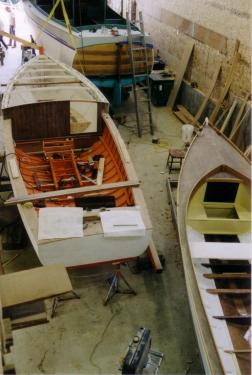 TUG’s planking is finished and she has been turned over for finishing out.

TUG’s owner first saw her in DESIGNS TO INSPIRE, Anne & Maynard Bray’s wonderful compilation of designs featured in “The Rudder” magazine from 1897 to 1942.

Unfortunately, most of Hand’s early drawings were destroyed by fire, so we had to redraw the lines and construction drawings based on the tiny reproductions in the magazine.