We’ve built a variety of fuel efficient craft including electric skiffs, fuel sipping displacement power cruisers, and of course sailboats. So if there were such a thing as energy credits for building low powered, fuel efficient pleasure craft, we would have some saved up. When a good customer of ours came to us with a need for speed, we figured we could trade some of our good karma for little more horsepower… ok a lot more horsepower!

PELICAN is designed to commute from Florida’s east coast to The Abacos across the gulf stream. Making the 200 mile passage within a slim weather window requires a good turn of speed. Marina’s, boat shows and magazines are all filled with boats capable of this feat: big deep vee center console boats with as much as 1000Hp of outboard on the back.

We launched PELICAN on a cold day in January for sea trials. Click to see video of her underway.

But is deep vee the only option for high speed in variable conditions? What if you could achieve the same soft ride with less deadrise and gain some valuable fuel economy? These were questions posed by the customer, and the new design currently under construction is, if not the answer, an excellent hypothesis.

For inspiration for the new design Doug looked to local Bahamian watercraft. He happens to be very familiar with the Albury Runabouts, having taken lines from a fine example in the Bahamas several years ago and produced a set of drawings. He is also familiar with the performance of these boats by way our good friend Benjamin Mendlowitz, who uses an Albury Runabout (almost daily in the summer) for his photo chase boat.

The Albury performs respectably in a chop but without a deep v carried to the transom. The design is tried and true, and Doug believes one of the reason for their soft ride is the hard turn of the bilge at the waterline. Alburys were originally framed with grown Madera crooks. Only the crooks with the tightest bends were used to create a very hard turn of the bilge. The turn is right at the waterline, and so the angle of deadrise (or vee) where the boat meets the sea is locally quite steep (or deep). Meanwhile, further below the surface, the turn of the bilge continues and fairs in to a shallow v. 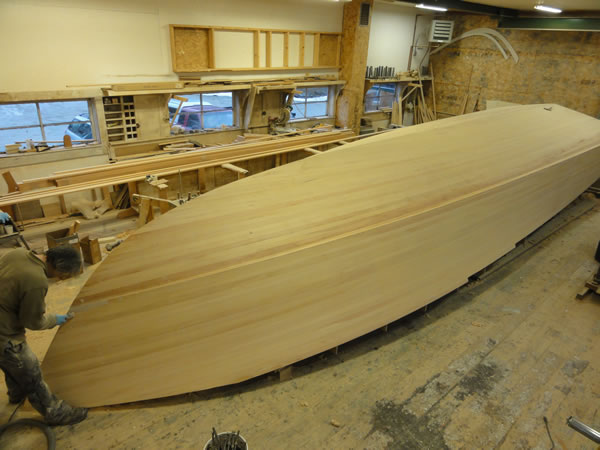 PELICAN essentially has the bottom of an Albury Runabout. However just above the waterline and the crucial “turn of the bilge” is an integral spray rail which fairs into heavily flared bow sections a sharply raked stem, a bit of tumblehome at the quarters and a radiused transom.

Instead of a center console PELICAN’s helm is enclosed in a small but comfortable pilot house. In fair weather the sliding doors can open and you’ll have all the wind in your hair you want at 50 mph! But if the weather turns you’ll make it home dry.